Quite a nice board; can have up to 16 Opteron 4200/4300 CPU cores, with up to 64GiB of RAM. It holds its own against more modern machines, especially when compiling large source trees (for compilers, what you want is high RAM and more CPU cores).

This is a desktop board using AMD hardware (Fam10h and Fam15h CPUs available). It can also be used for building a high-powered workstation. Libreboot also supports it. The coreboot port was done by Timothy Pearson of Raptor Engineering Inc. and, working with them, merged into libreboot many years ago. Now osboot also supports it!

Note that not all boards are compatible. See board status below to determine compatibility with your board.

Flashing instructions can be found at ../install/ - note that external flashing is required (e.g. RPi), if the proprietary (ASUS) firmware is currently installed. If you already have libreboot/osboot/coreboot, by default it is possible to re-flash using software running in GNU+Linux on the kcma-d8, without using external hardware.

It has a 25XX NOR flash (SPI protocol) in a P-DIP 8 socket, which looks like this (NOTE: not the same board, but the photo illustrates what the chip looks like): 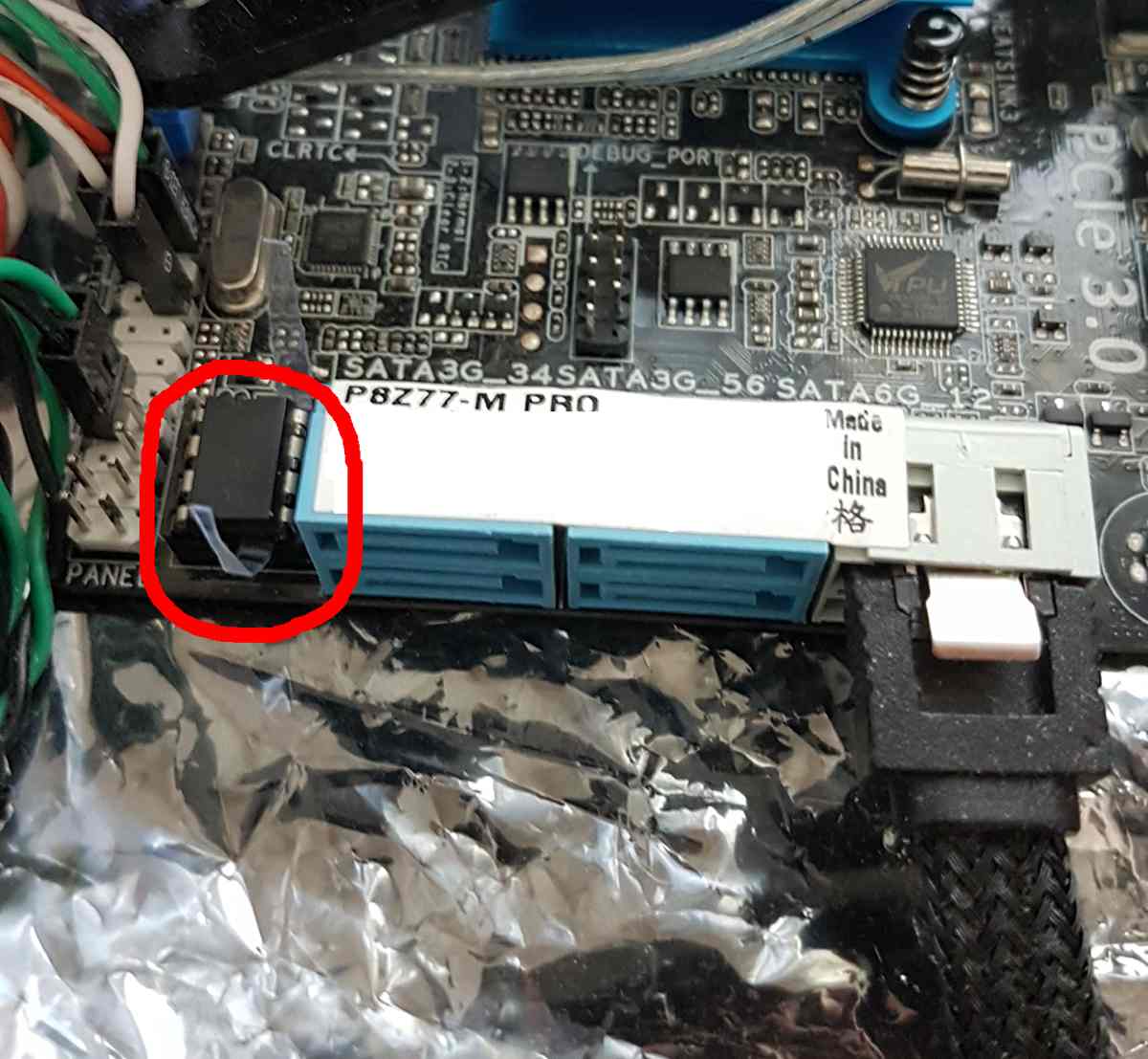 The default one is a 2MiB chip. We recommend 16MiB:

Using 2.54mm dupont leads and a breadboard, you can flash the chip. See here how to flash it:

Reprogramming 25XX NOR via SPI protocol with Raspberry Pi

NOTE: If you’re already running osboot/coreboot/libreboot, you probably don’t need to re-flash externally. Refer instead to the generic instructions on this page: ../install/#flashrom

Unlike Libreboot 20160907 (from which osboot, initially named retroboot, was forked back in December 2020), osboot supports finding and loading PCI option ROMs automatically, both in GRUB and SeaBIOS on this machine.

So for example, if you wish to use an add-on graphics card, you can! It’s no problem, and should work just fine.

“Requires” means needed for stability. You should always use them anyway!

Microcode configures the logic gate arrays inside your CPU, to implement the instruction set architecture, which in turn is what enables instructions to execute on your CPU. What do you think will happen if you don’t have these updates?

AMD CPUs are generally better engineered than Intel ones, and work much nicer without updates compared to Intel CPUs, but CPU manufacturers design their chips to accept updates for a reason!

There is no reason why you should not use them. The updates are non-free, but so is the microcode already burned into the CPU that you purchased, and thus you already consented to use microcode. So why not use the updates? :)

Not using them is pure folly. On that note: it is not currently (as of 18 March 2021) whether they are in use by default in osboot on this machine; attempting to include them in make menuconfig results in problems; however, I, Leah Rowe, vaguely recall having to manually patch out some code in coreboot when I did a Libreboot release back in 2016 for this board, to actually disable the microcode updates. So, it’s possibly that the use of microcode updates is just baked into the coreboot source code. A lot of AMD code in coreboot is thoroughly cursed; in fact, KCMA-D8 was dropped from coreboot. osboot is using an older coreboot revision for this machine.

There are two ways to identify a supported KCMA-D8 board:

Supported boards begin with a serial number of B9S2xxxxxxxx or above where the first character refers to the year of manufacture (A = 2010, B = 2011, etc.) and the following character the month in hexadecimal (1…9, A, B, C). Thus, any board produced September 2011 or later are compatible with Libreboot. Boards originally shipped with BIOS version 2001 or higher are also compatible.

For more detailed information regarding the coreboot port, see https://raptorengineeringinc.com/coreboot/kcma-d8-status.php

This board is ATX form factor. While the ATX standard, version 2.2 specifies board dimensions 305mm x 244mm, this board measures 305mm x 253mm; please ensure that your case supports this extra ~cm in width.

Don’t use it. It uses proprietary firmware and adds a backdoor (remote out-of-band management chip, similar to the Intel Management Engine. Fortunately, the firmware is unsigned (possible to replace) and physically separate from the mainboard since it’s on the add-on module, which you don’t have to install.

2MiB flash chips are included by default, on these boards. It’s on a P-DIP 8 slot (SPI chip). The flash chip can be upgraded to higher sizes: 4MiB, 8MiB or 16MiB. With at least 8MiB, you could feasibly fit a compressed linux+initramfs image (BusyBox+Linux system) into CBFS and boot that, loading it into memory (and nowadays there is LinuxBoot, for which we would recommend a 16MiB boot flash)

DO NOT hot-swap the chip with your bare hands. Use a P-DIP 8 chip extractor. These can be found online. See http://www.coreboot.org/Developer_Manual/Tools#Chip_removal_tools

Ideally, you should not hot-swap. Only remove the IC when the system is powered down and disconnected from mains.

Only text-mode is known to work, but linux(kernel) can initialize the framebuffer display (if it has KMS - kernel mode setting).

NOTE: This section relates to the onboard ASpeed GPU. You can use an add-on PCI-E GPU in one of the available slots on the mainboard. Nvidia GTX 780 cards are what osboot recommends; it has excellent support in Nouveau (free Linux kernel / mesa driver for Nvidia cards) and generally works well; however, the performance won’t be as high in Nouveau, compared to the non-free Nvidia driver because the Nouveau driver can’t increase the GPU clock (it doesn’t know how, as of 18 March 2021).

The coreboot wiki has some information about RAM compatibility. The wiki is deprecated but the info on it is still correct for this board. Some other considerations: